Etape Cymru …… Done
There simple as that , the UK’s toughest sportive is done .
If only it was that simple.
After a late change of plan I headed up to Wales early Saturday morning rather than the Friday . Which to be fair was a godsend for my roomie Big Dog Hardie as with hindsight he was glad to avoid a night without my snoring ( apparently its particularly bad between 2am & 3am ?? )
After arriving in Oswestry which surprisingly to me anyway is in England we headed down to Llangollen to meet Mr T and Pilko for some lunch and to sign on .

An early start of 6am was duly planned and then it was on to the shambles of the start . We all decided to take our own vehicles to avoid damaged bikes thus arriving at the start after being stuck in a queue to park for about 25 mins at different times .
After much fafffing , texting we all set off at different times needless to say morale was low , driving half way across the country with pals only to end up riding alone was not in the master plan 😦
What I didn’t realise was the Big Dog was having issues of his own , fancy starting the UKs toughest sportive whilst your Garmin is still sat nice and cosy in the boot of your car …. Oooops.

Onwards and upwards was the order of the day despite a relatively flat and fast start we all knew enough of what was to come .
We steadily climbed up then hit the 1st lump which was incredibly steep but not too long but certainly tested the legs and lungs.

Eventually we made it to the 1st feed station where gladly we all met up . Ahhhh relax this is more like it LEJOG Buddies back together riding along talking crap & moaning happy days .

Now Horse Shoe Pass is legendary around these parts and in all fairness it’s a stunning climb but certainly not the steepest and nowhere near the 20% quoted on the sign post . If anything the last mile or so is a cruise . It drags but would much rather ride that all day then the short and steep we are blessed with in Devon . The pass was classed as a timed KOM and with none of us likely to win I think we were all happy with our times 🙂

Now time for some descending and for Pilko to excel , you could almost here him cackling as he flew downwards . It’s then when you realise how amazing it is to have fully closed roads . The freedom to take up the whole road just makes an amazing difference . Although you need to mind thise cats eyes !!Those pros don’t realise how lucky they have it !!!
That said there were a few riders taking too many risks , at one hairpin there must have been about 6 skid marks going straight on and at another was an ambulance and a rather nice pool of blood 😳

Luckily we weren’t getting involved in any of these mishaps but maybe because we weren’t particularly chasing a time but just a finish !! Next year maybe different story 😀.

Hill after hill after hill was getting tedious but i was impressed by some of the road surfaces which looked despite being single track as if they had been resurfaced ( was this for our benefit?) and by the 3rd feed station weariness was certainly taking hold . With some big climbs to Worlds End amd over the moor to come it was becoming a real battle to keep the legs spinning. As time went on we knew we were near the back of the field but this also gave us the added bonus of being able to take the bends using the fastest line and not worry about anyone else . Did I mention closed roads was amazing ????
A few more little crashes on the way to Minera climb one of which was the second crash for one rider who slipped out on a nice fast wide junction …. Ouchers. Certainly made me think I would rather go slower than end up flying into a barb wire fence like one chap did !!!
Up to Minera and Worlds End was personally a hellish climb which starts off steep then drags up over the moorland for ever . It was a real low point for me as then it rained !!!!!!!!!

I get too hot with a jacket on too cold with one off and the road just gets too twitchy for me , in simple terms I am a fanny !!!
Unlike Pilko & Big Dog who seemed to excel in descending at speed in the rain , how they do it I will never know ? And Pilko even uses gatorskins and everyone knows they are hopeless in the rain !!
This Just pushed me on to close to my limits which I guess in hindsight wasn’t a bad thing and in fairness the only time I missed a corner was because I just swallowed a fly,I don’t know why I swallowed a fly , perhaps ill die …….

The route went in a loop ,obviously I suppose else it would be a long trip back to the car park ( Big Dog mentally struggled with this concept) but this also meant the last 15 miles ish were pretty fast wide roads and as always the last 15 endorphins kicked in and we were able to really get some speed up and cross the finish together . A few camp high fives a medal and a goodie bag and we were done .
Then on to meet Mr T who had finished got showered sorted his hair out polished his bike ,painted his nails , trimmed his designer stubble and was looking suitably spiffing all to await our arrival ………… Silky

So what can I say summarise?

1. An amazing experience with closed roads that really made the event ,flying though junctions and around bends safe in the knowledge that you had no vehicles to impede you is awesome .
And it was done proper not a half hearted effort all 88 miles of it .

2. The stewards , NEG outriders and even the cheering and clapping from the inconvenienced residents of North Wales was amazing as was the organisation from Human Race .

3. No matter how good a cyclist you think you are there is always someone quicker ( 3 odd hours in this case )

4. No matter how good a cyclist you think you are the great leveller is hitting the tarmac at speed . Slow down guys your gonna get hurt !! 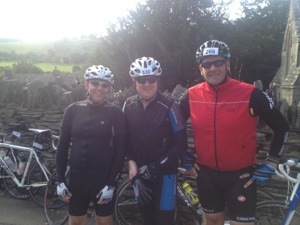