Today began with the usual autographs and paparazzi ( I went to the derelict ballroom to get my bike ) and then some more negotiations with Forme ( he said have a good ride )
And off we went again, a few aches and pains in the nether regions seemed to be niggling at me today ouchy .
It was an early start today due to the towns we had to negotiate and it wasnt the warmest despite the briefing saying fine weather.
It was also a day when we would be mostly on the A49 for the majority of the day . Mentally it makes for hard riding knowing the next time you turn off a road will be 70 odd miles away .
It’s hard to explain the emotions you go through whilst riding these distances day in day out with your legs just spinning away . But it’s very much peaks and troughs ( cheers nick) . There have been times when we could all call it a day but we know that’s never going to happen as the camaraderie and spirit is amazing not forgetting the huge amount of money that have been donated to out charities.
Our biggest obstacle today wasn’t going to be a hill it was going to be urban sprawl and it was called WARRINGTON DUH DUH DUUUUUHHHHH!!! ( feel the drama)
So if There is one man making serious money in Warrington it’s the local traffic light salesman. It’s Chaos and it’s worse on a bike believe me . We had road rage and even got called Bike Twats!!! I don’t know you ride a 1000 miles for charity raising thousands of £ and you still get called a bike twat…. Life is good mrs lard arse Picasso !!!
We made it across in one piece with just a few near misses and carried on our quest to follow the A49 as far as possible!!!
Next stop the water stop at Chorley which was to be good news/ bad news for our very own Liam . He had family awaiting him and received an amazing reception . 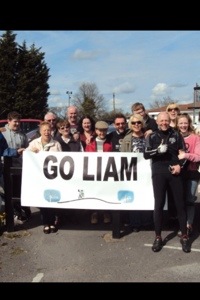 The bad news was he missed quite possibly a visit to the best bike shop in the whole of northern England ( not forme stockists I am led to believe sadly )
In fairness it gave him a huge lift and renewed his enthusiasm for the onward journey to the metropolis of Preston where we had the luxury of an Ibis with a pool table ……… Oh yeah read it and weep we had entertainment !!!!!

This entry was posted in Training and tagged charity, forme, Lejog, may madness, strava. Bookmark the permalink.